Why the Masses in Mideast, Asia and Africa Turned to Radical Islam? 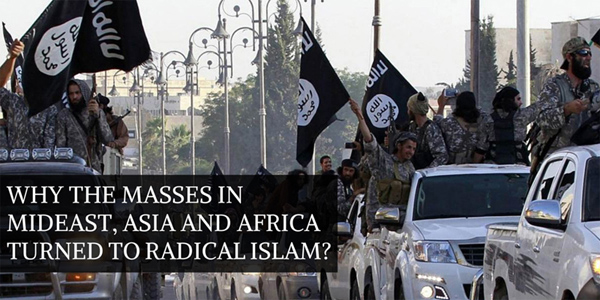 The turmoil in the Middle East and Islamic World did not come from nowhere. It is in many case self-inflicted wounds which forced the masses to turn to a violent change and drawn closer to radical Islam.

The region has long been portrayed by botched ideologies and the propensity to entrench political regimes through large-scale suppression of civil society, grabbing of power through corruption, nepotism and awarding the loyalists.

The post-colonial Islamic World initially experienced the rise of communism, socialism and in some areas nationalism but was quickly dominated by bloody coup d’états in Middle East, corrupt monarchies, and brutally suppressive regimes.

While Afghanistan, Pakistan, Bangladesh and Indonesia, faced series of military takeovers often backed by Western or Russian regimes. By aligning with world powers and successfully winning the support of so-called International Community the monarchies and autocrats succeeded in securing their regimes but damaged the prospect of future of the nation-building structures.

The rulers continued to suppressed their people in the Middle in the name of Arab nationalism, liberation of Palestine, anti-Communism or and anti-imperialism but continued to ignore their main responsibilities to address the real need and welfare of their nations.

The Muslim rulers not only failed to address genuine socioeconomic problems of their masses but often themselves radicalized its people and promoted extremism to achieve their own objectives.

With the rise of Al Qaeda and Islamic State of Iraq and Syria (ISIS) the whole system is under threat as masses wanted to break the system that pushed them to dark days and future.

The world powers for decades backed and supported the rulers in allied states or kingdoms only to gain their own economic interests objectives and to win big defense and oil contracts.

Finally it was the extremists and radicals who took the initiative to rise against rulers and shock the powers which supported the regimes.

Extremists capitalized on protests, and filled the void of a disorganized and sometimes nonexistent opposition or friendly opposition and took the lead for a change. The appeal of a radical change even via radical Islam has propelled them to the regional and global stage.

Despite rising of unrest and alarming growth of extremism, Muslim World governments have shown no serious commitment to share powers with other segment of society, end corruption, establish good governance or ensure respect of human rights for their own majority let alone minorities.

To ensure big contracts, win new allies the World Powers established close ties with rulers and monarchies ignoring the real concerns of the masses in those countries and continued to follow the policy of realpolitik.

The fragile and basically dissatisfied society quickly turned into luxuriant grounds for extremism and terrorism. The fragmentation of decades-long tribal and traditional systems in the Muslim World offered a golden opportunity to extremists who successfully exploited one alliance or community against the other (in Syria, Iraq and Yemen to some extend in Pakistan) to gain its own objectives. The rulers backed by some foreign powers played one card after another against their own masses to ensure their continued rule and existence.

The foreign powers and their allied rulers gained massively from the resources of those countries but remained least concerns about the rising literacy rates, unemployment, health care and even lack of basic rights. Finally the International Community has realized that terrorism is a major global threat.

There is still time for the International Community to reverse its old interest-driven policies and demonstrate genuine interest in the future of the people of Islamic World.

Priority one should be given to the rights of self-determination of Palestine and other occupied lands, settlement of disputes among nations be allowed or even facilitated, dual-standard against Asian, Arab or African people should come to an end and the International Community must contribute genuinely not only play one card against other to improve the living standard of the Asian-Arab and African people.

The International Community must persuade local Rulers and Government to focus on investment in nation-building, education, health care, ensuring protection of human rights and empowering institutions rather than personalities.