Recent outbreak of Ebola has not only killed thousands of people but has utterly affected the way people live while damaging healthcare systems and demolishing the economies of the West African countries. While Sierra Leone, Guinea and Liberia struggle to fight with Ebola, many countries have closed their borders, imposed travel bans and enforced necessary quarantines for health workers returning from Africa, to contain and stop the virus from spreading to other regions. As the world slowly wakes up to the catastrophic situation havocked by Ebola virus, thousands of people are getting infected each day, posing a threat to the whole world. Discrete actions and policies of the world leaders such as travel bans reveals there is more focus on keeping themselves safe rather than eliminating the disease itself. The report studies how the virus outbreak in any region is an equal threat to the whole world. Frightful manner of governments as well as alarmed behavior of health and science experts even in this advanced era reveals how little the developed world is prepared for epidemics like Ebola. Exploring the background and current scenario of Ebola crisis, the report focuses on future scenario, the threat posed by Ebola and recommends how to be better prepared in case of future disasters. 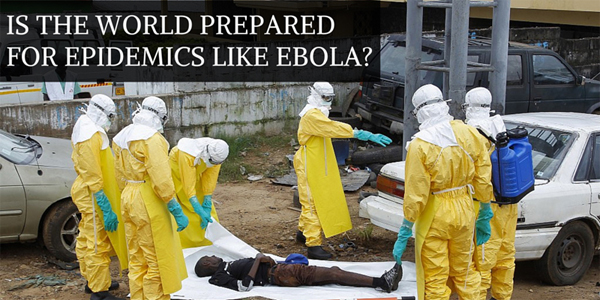 Africa – the name brings to mind a dark continent, exotic forests, the place where poverty dwells, where wars and disease happen. This is why no one bothered about Ebola until it worsened as much to threaten the developed Western and European regions.

The current outbreak of Ebola began in Guinea December 2013 and has claimed more than 5000 lives leaving many thousands more infected. Three countries with shared borders – Sierra Leone, Guinea and Liberia – bear all the burden and havoc caused by Ebola. These countries are also the same that are already struggling with poverty, the aftereffects of past civil wars, and other massive development challenges which make the situation ever more grave and calls for combined, equal efforts from international community.

However the global response has been abysmal and has revealed inadequacies to meet the crisis and emergency situation such as Ebola even in this advanced scientific and technological era. Instead of preparation and quick action to contain and combat the disease the developed world appears frightened as they closed borders, imposed travel bans and enforced mandatory quarantines for health workers returning from African region. Yet there is still a growing fear that the public health crisis in Guinea, Sierra Leone, and Liberia is rapidly transforming into a full-blown catastrophe.

Exploration and effective action is what the world needs right now. What people need to understand about Ebola is its Multiplication process which is nonlinear, so the number of people catching it doubles every 20 days, explains, Nassim Taleb, an author. The problem, according to Taleb, is that if there is no urgent action in Liberia, Sierra Leone, and Guinea — then there will be consequences everywhere. “The closer you are to the source, the more effective you are at slowing it down ... it is much more rational to prevent it now than later.”