The advancement of military technology and sophisticated weapons and missiles, gave birth to unprecedented threats to international peace and security. By the end of cold war, the spread of missiles and nuclear technology posed new challenges to world peace. To address apprehensions and roll back this trend, the Group of Seven (G-7) initiated the Missile Technology Control Regime (MTCR). With the aim to halt the proliferation of of nuclear weapons, ballistic missiles and missile technology, the world powers attempted to limit the nuclear and missile technology in few hands. The birth of MTCR provided an opportunity to many like-minded countries to unite in the defense of their own strategic interests. However, the MTCR failed in its prime objective to restrict the transfer of missile technology. At the same time, many observers believe that the success of MTCR remained limited to documents. Therefore, this report sheds light on brief background and development of MTCR, clarifies its objectives and goals, and analyzes its success and failures. In conclusion the report offers recommendations to further improve the worthiness of this Regime. 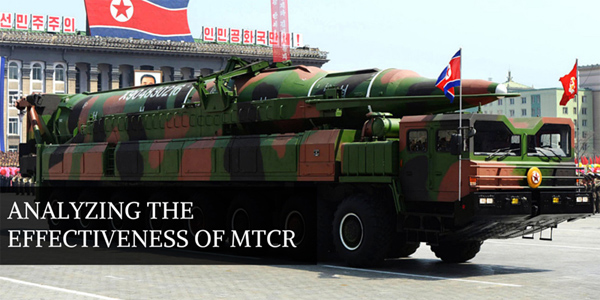 The Missile Technology Control Regime (MTCR) is a non-binding international accord. It is a non-treaty association of states that have an established policy for limiting the spread of missiles and missile technology. It was established by the G-7 industrialized countries (Canada, France, Germany, Italy, Japan, Great Britain, and the United States) on April 1987. The main reason behind the creation of MTCR was to restrain the spread of unmanned delivery systems for nuclear weapons, particularly delivery systems that are capable of carrying a minimum payload of 500kg and minimum of 300 km.

In 1983 France, Germany, Italy, the United Kingdom, and the United States initiated the formal discussions on controlling missile proliferation. Later Japan and Canada also joined them and they reached an agreement to control the proliferation of ballistic missiles capable of carrying nuclear warheads. It was that point when a nuclear-capable missile was defined as one capable of delivering at least 500 kilograms to a range of 300 kilometers or more. Eventually these events led G-7 countries to formally announce the Missile Technology Control Regime on 16 April 1987.

Since MTCR was constructed at the end of the Cold War, it principally focused on the curb the spread of missiles capable of delivering nuclear weapons. In order to deal with the escalating proliferation of nuclear weapons, some like-minded countries initiated the MTCR, mainly to curb the proliferation of ballistic missile, nuclear weapons and missile technology by addressing the most destabilizing delivery system for such weapons. At the annual meeting in Oslo in 1992, it was agreed to enlarge the scope of the MTCR’s, and its original focus on missiles for nuclear weapons delivery was extended to a focus on the proliferation of missiles for the delivery of all types of weapons of mass destruction (WMD), including nuclear, chemical and biological weapons. Such proliferation has been recognized as a threat to international peace and security. The regime found a way to counter this threat by keeping a close observation over the transfer of missile equipment, material, and related technologies usable for systems capable of delivering nuclear weapons.