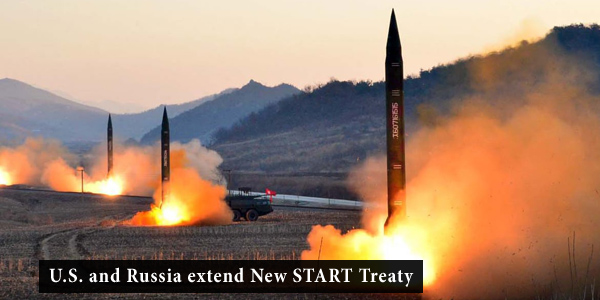 The United States and Russian Federation agreed to extend the New START Treaty until February 4, 2026.

The extension of New START treaty will ensure limits on the weapons of two countries that account for 90% of the world’s nuclear weapons stockpile. The treaty imposes limits on all the American and Russian deployed intercontinental-range nuclear weapons.

The decision to extend the treaty until 2026 was made during a phone call between the U.S. President Joe Biden and Russian President Vladimir Putin. Both leaders approved the extension of the arms treaty by five years and agreed to discuss the matters of strategic stability, security and arms control.

The treaty also binds each party to provide 48 hours notification before a solid-fueled ICBM leaves a production facility, when missiles become deployed or non deployed and sent to declared facilities and provide notification of its associated base or facility. Both sides are also required to provide two weeks prior notification of a major strategic exercise.

The U.S. and USSR signed the first Strategic Arms Reduction Treaty, START I in 1991, which took effect in 1994. Later on, Russian President Dmitry Medvedev and the U.S. President Barack Obama signed the New START treaty in 2010, which was set to expire on February 5, 2021. The original treaty limited each side to 1,550 long-range nuclear warheads and 700 missiles. Under the treaty both parties have exchanged 21,473 notifications as of February 4, 2021.

The Treaty, however, does not restraint the testing, development or deployment of current or planned U.S. missile defense programs or long-range conventional strike capabilities of both countries.

Under the New START agreement, both the U.S. and Russia will conduct 18 on-site inspections per year, consisting of ten Type One inspections and eight Type Two inspections under the New START Treaty. The treaty will allow both parties to inspect the number of reentry vehicles on deployed ICBMs and SLBMs, confirm the number of non-deployed launcher limits, onboard nuclear warheads as well weapons attached to deployed heavy bombers.


Reaction from the U.S. and Russia

“Russia has the capacity to deploy more than 1,550 nuclear warheads” according to the official data but the New START Treaty constrained the country to deploy 1,447 strategic weapons. The U.S Secretary of State Antony Blinken believes that the treaty will allow the U.S. to “monitor Russian compliance with the treaty and provides greater insight into Russia’s nuclear posture”. The U.S. Secretary of State applauded the decision made by both countries to extend the treaty and stated that it would make world a “safer” place.

Similarly, Russian Deputy Foreign Minister Sergei Ryabkov declared that the treaty is crucial “for strengthening international security and strategic stability”, while urging the U.S. to act in a responsible manner and dismissing Washington’s “destabilizing concept of a limited nuclear war”.

Despite positive interaction between the U.S. and Russian sides and international community’s reactions, critics argue that, although New START Treaty limits operationally deployed nuclear weapons and delivery vehicles, the treaty only focuses on number of the warheads and fails to limit both sides for improving the quality of their warheads and pursuing high-precision long-range conventional weapons.

The treaty was hindered by the Trump administration due the conditions of tougher inspections and including China into the treaty, which was refused by the Chinese side.

In 2019, the U.S. blamed Russia for violating the Intermediate-range Nuclear Forces (INF) and withdrew from the treaty that limited Russian and U.S. missiles of 5,500 kms range, making New START the last remaining nuclear weapons control treaty between the two countries. However, the U.S. President Joe Biden had indicated during his presidential campaign that he is in favor of extending the New START treaty with Russia without any new demand or amendments. 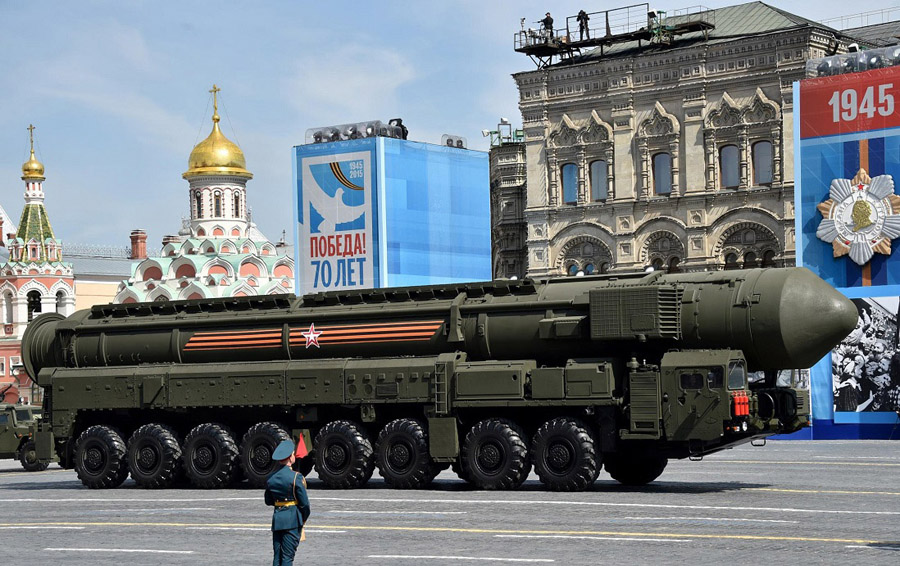 The North Atlantic Council Statement welcomed the agreement between the U.S. and Russia to extend the New START Treaty and extended support to the implementation.

Although NATO expresses collective concerns and recognizes threats to Euro-Atlantic security posed by Russian Federation, NATO members express their full support to implementation of the New START and urge for meaning dialogues with Russia to improve strategic stability.

NATO members believe that arms control agreement between two major powers is a positive step towards international security and consider the extension of the New START as an effort to address nuclear threats and emerging challenges, the official statement said.

Germany termed the extension of the New START ‘a big news’ and a positive gesture that benefits Europe. The extension of the treaty to limit the number of strategic nuclear warheads truly benefits world security, said German Foreign Minister Heiko Maas, insisting that the INF Treaty and Treaty on Open Skies must also be reversed. He also urged all international actors for broader negotiations and strengthening global arms control and disarmament.

France also welcomed the “efforts and responsiveness” of both the U.S. and Russia and declared the New START treaty an important “pillar of the international arms control and disarmament architecture”.