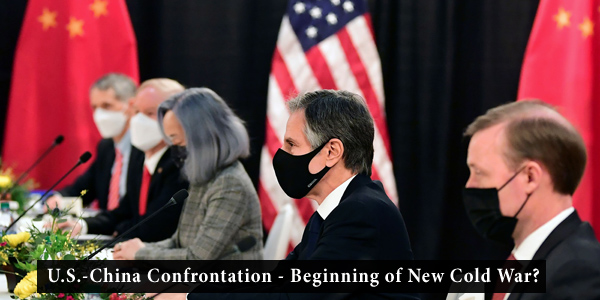 The U.S. and Chinese officials held first face-to-face meeting on March 18, after the U.S. President Biden took office in January 2021.

In opening remarks, the U.S. Secretary of State Antony Blinken and NSA Jake Sullivan, raised the issue of “actions by China in Xinjiang, Hong Kong, Taiwan, cyber attacks on the United States, and economic coercion toward our allies.” These actions, they said, threaten the rules-based order that maintains global stability.

In response, China’s top diplomat, Yang Jiechi, said people within the U.S. “have little confidence in the democracy of the United States.” Taking a jibe at human rights issues in the U.S., Yang said that “China has made steady progress in human rights” and China considers “Xinjiang, Tibet, and Taiwan as its internal affairs”. Rebuking the rules-based order, he said, “The U.S. does not represent the world” and claimed that the “U.S. is the champion” of cyberattacks.

The two sides left Alaska without any joint statement on collaborating in areas where they share mutual interest or future engagement.

China’s Xinhua news agency later said that Beijing and Washington agreed to look into climate change. China also called for increased coordination on major international and regional issues and asked the U.S. to “make the cake of cooperation bigger.”

The U.S. Secretary of State Antony Blinken said that despite tensions, the two sides were able to have a “very candid conversation” on topics of mutual interests, including North Korea, Iran, Afghanistan and climate change.


How the US sees the Alaska talks?

Yang’s speech reflected that “China is increasingly confident it is gaining America's measure across the spectrum of competition, be it economic, military, technology and regional supremacy” says Richard McGregor, a senior fellow at the Lowy Institute. “But the U.S. remains a formidable and dangerous rival”, and the only country that can create a united front to resist Beijing.

“China is way too premature in declaring the end of the American empire, and the miscalculation could cost China in its quest for superpower stature” the Bloomberg said. “The balance of power between the U.S. and China may be shifting, but it’s still pretty unbalanced. The U.S. maintains a significant lead over China, in just about every economic category.”

According to the Philadelphia Inquirer “the United States must get its domestic act together in order to convince the Chinese regime that this country is not on the downslide”. The Philadelphia Inquirer claimed that the U.S. allies in Europe and Asia do not want to line up openly against China but are willing to join with the U.S. in pushing back against Chinese government’s political, economic and military pressures.

In a coordinated act of blacklisting on March 22, the U.S. and its European allies placed sanctions against Chinese officials and entities over alleged human rights abuses against ethnic minorities. 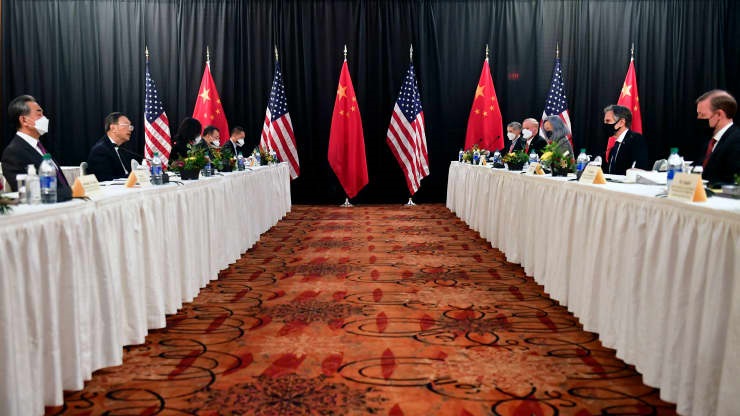 
How the China sees the Alaska talks?

The mood in China after the talks is defiant one. Wei Jianguo, former Chinese minister, described the talks as “a grand show of China's strength, indicating to the U.S. that China's development and growth cannot be stopped. The U.S. should not underestimate China's resolve to safeguard its sovereignty, security and development interests.”

“There is a new sense of confidence on the part of the Chinese that they the equals of America. That they speak from a position of strength and America from a position of weakness” says Martin Jacques, visiting Professor at Tsinghua University. “America is in the process of coming to the painful realization that China is now its equal.” A Beijing-based analyst said the talks were “practical and realistic”. But he warned that by rallying regional allies to counter China, the Biden administration’s strategy could be interpreted by Beijing as “an expansion of Trump’s anti-China policy toward a full-scale of containment policy.”

Days after the dialogues, Russia and China made the call for a UNSC summit to maintain global stability amid Increasing political turbulence” saying the United States was acting in a “destructive” way reminiscent of the Cold War era”.

China's State Council Information Office on March 24, 2021, published its annual report on the U.S. human rights violations, amid the U.S.-led ideological battle against China over human rights issues. The report claimed that the United States’ incompetent pandemic containment led to tragic outcomes and that American democracy triggered political disorder in the country. The report also highlighted the growing polarization between the rich and the poor that aggravated social inequality in the United States.

The U.S. analysts believe the U.S. competition with China will be determined by economics and technology rather military. And they will compete across the geopolitical trade, technology, cybersecurity, and military domains.

China realizes that the U.S. considers its alliances as a “prominent bargaining chip to pressure China” and has made it that Beijing “is not afraid of being blackmailed”. Global Time editorial says “China does not want the US to interfere in China's internal politics. Any relevant moves from Washington will meet serious resistance and countermeasures.”

Yang Jiechi gave a clear message to the world that China and the international community should follow the UN-centered international order underpinned by international law, not what is advocated by a small number of countries of the so-called “rules-based” international order, as Yang Jiechi said "the U.S. does not represent the world". Despite tense relations between two super powers, China prefers continued engagement with the U.S. on equal terms.

China’s former vice foreign minister Fu Ying said the bilateral relations between China and the U.S. will now hinge on whether the two countries can “peacefully co-exist and resolve each other’s legitimate concerns within a single international order.”

The U.S. is likely to focus on its domestic agenda and rebuilding ties with allies. “Biden administration’s baseline goal with China is evidently to buy some time…to put the United States’ house back in order” and to rebuild alliances by “reassuring regional partners such as Japan, South Korea, India and Australia that the United States is back” Washington Post claims. The March 12 summit of QUAD (Quadrilateral Security Dialogue) signaled Biden’s intent to work closely with Japan, India and Australia to counter the Chinese in the Indo-Pacific region.

The U.S. is working on aligning its allies to counter China, as France and the United Kingdom are already seeking closer engagement with the QUAD members. The Washington seeks to unite the QUAD and ASEAN nations against Beijing, however neighboring ASEAN countries remain divided on their stance towards China.