US Drone Program:
Ethics and Blowback - A Growing Concern 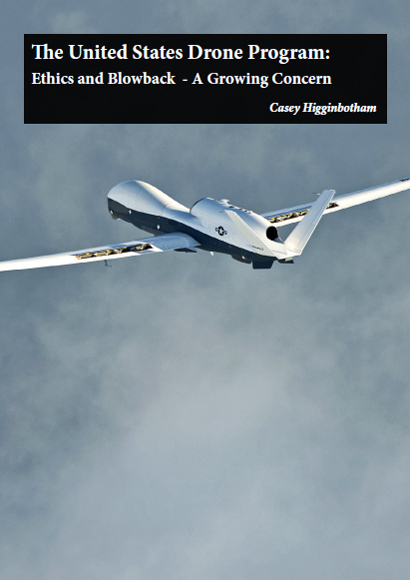 Policy Recommendation:
Scale Back the Use of Weaponized Drones in Non-Combat Zones

“Dear Obama, when a U.S. drone missile kills a child in Yemen, the father will go to war with you, guaranteed. Nothing to do with Al Qaeda,” - Yemeni Lawyer on Twitter

This narrative from Yemen has become a familiar story along the Arab Peninsula and Pakistan, a five-hundred pound bomb is detached from an MQ-9 reaper (Drone), cruising at 50,000 feet above, the laser guided bomb explodes on impact devastating everything within a hundred yard radius. There is considerable to evidence that argues weaponized drone usage within non-combat zones is hampering the United States goal of combating terrorists. With the rise of ISIL, an examination of the negative repercussions resulting from the United States over reaching drone program is necessary. In doing so one will find that the strikes are in fact damaging public opinion and support for American policy and more importantly is motivating extremists into violent resistance in order to attempt to stop this aggressive US program.

On October 22, 2013 Al-Jazeera reported “White House Defends Drone Program against War Crime Claim,” ‘the report came out based off Amnesty Internationals’ claims that the United States has breached international law via drone attacks in Pakistan and Yemen. Expectedly the U.S. officials strongly disagreed with the findings, they quickly responded releasing a statement that the drone program is in full compliance of international law. In the new report Al Jazeera made note of Amnesty International’s request for greater pellucidity in the drone program, citing both the C.I.A. and the presidential administration’s lack of transparency in the ongoing drone program. Contained in the article was the Human Right report which went examined six drone strikes and the aftermath that followed, highlighting the international issues with this far foreign policy tool.

This and many other reports come in response to the dramatic increase in drone strikes throughout non-combat zones over the past few years. There have been countless pleas from countries and international rights groups for the Obama administration to not only release details about the drone strikes, but to terminate the controversial program altogether. Pakistan’s Prime Minister Nawaz Sharif urged this point when he directly called for “an end to drone attacks” in a meeting with president Obama back in November, 2013. However, we all see this too often in countries receiving US aid; opposition in public, but consent of leadership behind closed doors. Inevitably without widespread domestic opposition to the onslaught of drone strikes, there will surely be no change in American policy.

To further contextualize how drastically this type of warfare has increased, in 2009 there was only one drone strike in Yemen, by 2012 there were forty-one. In comparison to just five years ago, the drone program has grown at an alarming rate. This goes to show that drone use has become a central part of the Obama Administration’s evolving strategy in the “War on Terror.” There are obvious ethical concerns with drone strikes such as civilian casualties, minimal transparency, and noncompliance with the Fourth Geneva Convention which established protection of civilian personnel during wartime in 1949. These concerns have not proven to be an effective agitator to prevent the United States government from halting the drone program. With growing media attention and international opposition to the strikes, it is necessary to determine how effective this counter terrorism tactic is. Thus, I pose the question: Is the United States drone strikes undermining America’s security?