Is “Nuclear Deterrence” still a relevant strategy for the 21st Century? 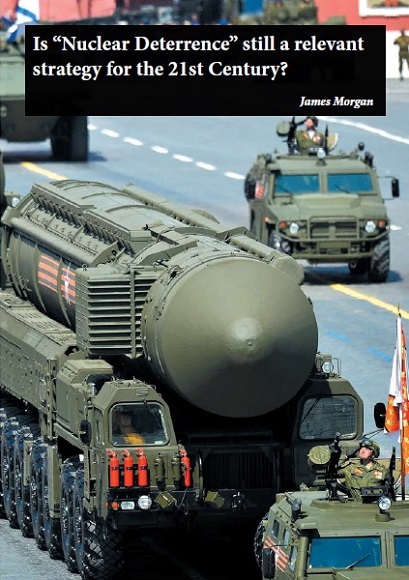 The problem with the current nuclear deterrence is that the attitude surrounding its basic ideology is still based on a post-war era of inflated egos between entire nations, taking only into account who has the biggest and best. Technology and political landscapes have changed to a point where theories and practices from nearly half a decade ago, are no longer as poignant as they should be. Deterrence comes hand in hand with non-proliferation, they are needed to check each other, to prevent either a return to the days of hyper-proliferation, or to prevent an uneven and opportunistically volatile one-sided disarmament process. The 21st Century has seen the development of contested and troublesome behavior. Iran and North Korea’s quests for nuclear capability, US protection of Israel’s desire to maintain their offensive rhetoric surrounding Iran as well as UK and US apparent decrease in hardware whilst adamantly renewing and upgrading their weapons systems, are all examples of problems facing the global community in the 21st Century.

The only trouble being, this generation of deterrence theory has the added complications of hybrid warfare, meaning no longer can states instantly identify their attackers. Moreover, their attackers are not the uniformed armies of another nation, they are terror cells, state-sponsored terrorism, lone wolf attackers, cyber attackers and non-uniformed military groups. Developments in cyber warfare as well as the ever-expanding market for private military and security contractors are two examples of the complexity of modern hybrid warfare which cannot be allowed to be compatible with a traditional deterrence theory. This essay will focus on why with the rise of uncertainty-promoting hybrid warfare, nuclear deterrence against conventional nation-nation attacks as well as a deterrent against other aggressive or undesirable actions in general, are both flawed. Mistakes happen, manipulations of computer systems are all too easy and tempers are fraying in volatile parts of the globe. Nuclear deterrence is best pictured as a carefully constructed house of cards, next to an open window. It exists in its originally constructed form, however now the wind has changed, we do not know for how long, and yet nobody appears willing to begin the disassembly or appropriate reconfiguration. Is it wise to take a “if it’s not broke, don’t fix it” approach? This essay will discuss how a traditional deterrence theory approach is no longer compatible with the 21st century security threats.