Highlights of G7 Summit in France 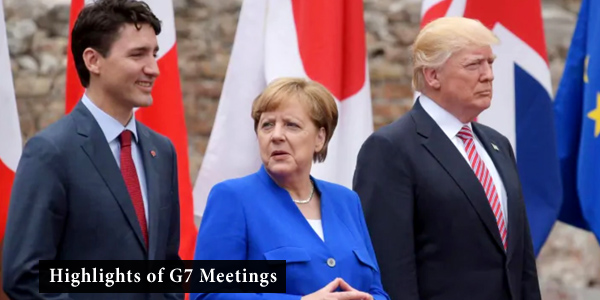 It was for the first time that French President Emmanuel Macron invented an innovative pattern for the extended alliance and offered a new concept of the “League of Democracies” for G-7. The new term aimed at permanently blocking a place for non-democratic states particularly Russia and China, was praised by the President Donald Trump.

During August 24, 2019 one-to-one talks between President Donald Trump and French President Macron it was agreed to accept French President’s initiative to invite Iranian Foreign Minister Mohammad Javad Zarif to assess the shift in Iran policy despite sanction on Iranian officials. During close-door inter-actions, Iran suggested to reconsider the introduction of additional protocols on nuclear deal but affirmed that it can only be possible if sanctions are lifted, even partly.

French and German officials expressed their belief to the President Trump that reconciliation between Tehran and Washington could help get reassurances from Iran to freeze its plans for long-ranged missile production and reduce tensions with Israel. European leaders warned that if tension in the Gulf rises, Europe would suffer most and third parties would benefit from such a scenario.

It was initially clear that most EU members remained reluctant and declined to join the U.S., Australia, Bahrain and the UK by engaging their Navies in the Strait of Hormuz. However, France has agreed to join and support this initiative.

During the first day’s interactions President Trump persuaded the participants that China should not be allowed any position, but Russia could be re-engaged. However, the EU states - with the exception of Italy - conditioned it with ‘meaningful’ progress on Crimea.

Most world leaders attending the summit asked President Trump to resolve the trade war with China. However, President Trump preempted any such move by announcing additional duties could be imposed on Chinese imports if deal is not in favor of the United States.

The G-7 leaders agreed to not to make any statement on Hong Kong situation but recognized the need to prepare for diplomatic, moral and social support to democracy campaigners not only in Hong Kong but also in other areas where freedom is being suppressed by Communist regimes.

During the one-to-one meetings President Trump warned the allied leaders that there are serious threats of domination by China right from Asia-Pacific to South Asia and Africa if Western nations do not take preemptive measures to counter it. President Donald Trump also discussed about rising technological penetration by China into Europe and North America with French President Emmanuel Macron and urged for urgent need to counter the moves.

The UK Prime Minister Boris Johnson who attended the G-7 Summit meeting for the first time developed some difference with European Council President Donald Tusk over the UK’s exit from the European Union. Prime Minister Johnson received a rebuff from Donald Tusk who made it clear that he would not negotiate a no-deal scenario.

President Donald Trump also discussed the prospects of post-Brexit trade deal with the British Prime Minister Boris Johnson and welcomed the British move of leaving the EU. However, French and German leaders discussed their reservations on Britain’s moves.

During this year’s G-7 Summit, President Trump remained less critical and gave way to French President Macron to dominate the forum but agreed to skip a final communiqué. During the first day of the Summit, G-7 leaders concentrated on climate change, global inequality, jobs and women’s empowerment, leading to criticisms from the U.S. delegation, while second day session focused on the extremely difficult trade discussions and the Amazon forest fires. Climate was still a sticking point at this summit.

The Leaders of the G-7 privately agreed to urge both India and Pakistan to avoid any further actions or any move that could escalate tension in the region. G-7 leaders avoided any direct official discussion on the situation in Indian-administered Jammu and Kashmir but agreed to play their respective roles and shared concerns on human rights violations in the region.

Australian Prime Minister restated his country’s pledges to troop commitments to the Straits of Hormuz and reaffirmed his country’s commitment to block any efforts to development long-range missile capabilities that may threatened the Western alliance or its strategic partners.

Australian Prime Minister Scott Morrison informed fellow members about the resolves of Pacific Island-nations developed at the Pacific Island Forum in Tuvalu to effectively stand by the commitment of free-navigation and sovereign rights of the regional nations to the natural resources.

Australian delegation offered to play a more ‘vigorous role’ within G20 for G-7 to defend and expand Western influence over India, Indonesia, the Philippines and Vietnam as Australia’s geopolitical capability has strengthened better than Russia and India.

Indian Prime Minister Narendra Modi who was also invited to attend the G-7 Summit meeting grabbed the opportunity to muster support for his government vis-à-vis Pakistan over his policy and actions on Indian-administered Jammu and Kashmir. Indian Prime Modi held talks with several world leaders but during his meetings with French President Emmanuel Macron and the U.S. President Donald Trump, he sent a distress call about the emergence of China-Pakistan Alliance that he believed would pose irreversible damage to the Western Alliance in Asia-Pacific and Indo-Arabian Region.

President Donald Trump agreed to caution the Europeans about his concerns and pledged full support to further strengthened US-India strategic and economic partnership to counter domination by China-Russia joint moves in the Gulf.

President Trump during his meeting with Indian Prime Minister Modi stressed that a close-collaboration between two democracies would also further the emergence of new democracies in Asia and Central Asia regions.

The G-7 Summit leaders privately agreed to urge both India and Pakistan to avoid any further actions or any move that could escalate tension in the region. However, avoided any direct official discussion on the situation in Indian-administered Jammu and Kashmir, and agreed to play their respective roles to share concerns on human rights violations in the region.