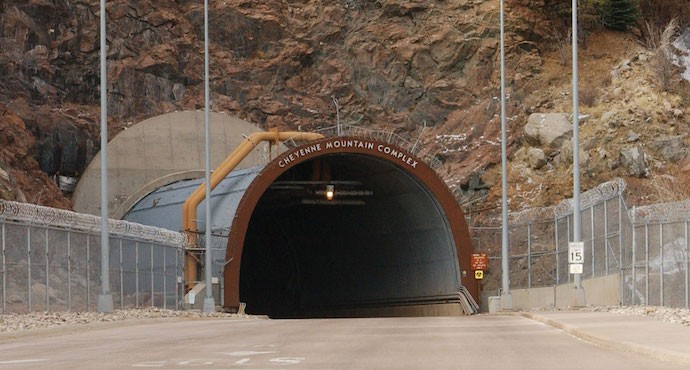 U.S. Army’s Northern Command in charge of homeland security isolating at the Cheyenne Mountain bunker as the coronavirus spreads

U.S. Northern Command (USNORTHCOM) has sent a part of essential command and control teams to multiple hardened locations, including the famous Cheyenne Mountain bunker complex in Colorado to keep them in isolation.

The steps were taken to ensure the personnel would continue to watch for potential threats to the U.S. homeland as the coronavirus pandemic grows. It is also meant to adopt extreme so-called “social distancing” to limit the potential spread of the virus should it make its way onto the base.

Under normal circumstances, the watch teams, which support both NORTHCOM and  North American Aerospace Defense Command (NORAD) missions, would take shifts staffing a central command center at Peterson Air Force Base in Colorado.

‘To ensure that we can defend the homeland despite this pandemic, our command and control watch teams here in the headquarters split into multiple shifts and portions of our watch team began working from Cheyenne Mountain Air Force Station,’ Air Force General Terrence O’Shaughnessy, head of U.S. Northern Command and NORAD, said during a Facebook Live.

“Our dedicated professionals of the NORAD and NORTHCOM command and control watch have left their homes, said goodbye to their families, and are isolated from everyone to ensure they can stand the watch each and every day to defend our homeland,” General O’Shaughnessy said during the virtual town hall.

“It’s certainly not optimal, but it is absolutely necessary and appropriate given the situation.”

Completed in the mid-1960s, during the height of the Cold War in the late 1950s, it was built to survive a nuclear attack. After the Soviet Union collapsed, it called off its “nuclear watch” in 1992

The defensive bunker lies 2,000 feet (610 meters) under Cheyenne Mountain. The complex is a grid of six tunnels up to 40 feet wide and three stories high and shielded by 2,500 feet of granite. It can hold 15 connected buildings made of steel plates. It can be sealed off by two blast doors made of concrete and steel.

Known as the most secure facility in the world, the complex is highly resistant to nuclear and electromagnetic bombs, as well as biological weapons.

Since then, NORAD’s focus and facilities have evolved to meet the 21st-century threats and is fully occupied by commands for cyber, intelligence and space surveillance.