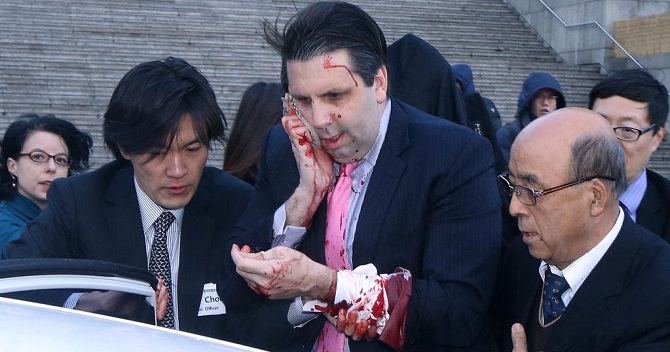 SEOUL (South Korea) — The United States ambassador to South Korea has been slashed in the face and arm in a vicious knife attack in Seoul.

The US ambassador, Mark W. Lippert, was attacked early Thursday morning by a knife-wielding Korean man while speaking at a breakfast forum in Seoul, but his injuries were not considered life-threatening, U.S. and Korean officials

His assailant, identified by police as 55-year-old Kim Ki-jong, carried out the attack while Lippert, 42, was attending a breakfast function at the Sejong Cultural Institute in the city centre of the South Korean capital.

Ambassador Mark Lippert, Mark Lippert underwent two-and-a-half hours of surgery after he suffered a cut to the wrist in addition to his cheek. He was bleeding from wounds to his face and wrist but was able to walk after the attack. Doctors said later on Thursday his condition was stable after “very successful” surgery that required 80 stitches in his face. In a televised briefing, Chung Nam-sik of the Severance Hospital said 80 stitches were needed to close the facial wound, which was just over 4 inches long and just over 1 inch deep. He was in stable condition after surgery at a hospital in Seoul.

Chung said the knife also penetrated through Lippert’s left arm and damaged the nerves connected to his pinkie and tendons connected to his thumb. Lippert will need to be treated at the hospital for the next three or four days and may experience sensory problems in his left hand for several months, Chung said.

According to Korean journalists and officials who were at the scene, the attacker opposed joint American-South Korean military exercises. YTN TV reported that the assailant, identified by police as Kim Ki-jong, 55, screamed, “South and North Korea should be reunified” as he launched the attack. The two Koreas have been divided for decades along the world’s most heavily armed border. The assailant, dressed in traditional Korean clothes and identified as Kim Ki-Jong, 55, was immediately wrestled to the ground and taken into police custody.

US and South Korean Government response

Both governments responded swiftly after the attack. “We strongly condemn this act of violence,” said Marie Harf, deputy spokesperson for the U.S. State Department. President Park called the incident “intolerable,” likening it to an assault on the South Korea–U.S. military alliance itself.

“We strongly condemn this act of violence,” said State Department spokeswoman Marie Harf. “The ambassador is being treated at a local hospital. His injuries are not life threatening.”

Thoughts are w/@mwlippert & his family after today’s senseless attack. Grateful to people of #Korea for their care for him & well wishes.

President Obama telephoned Lippert after the attack to express his thoughts and prayers for a speedy recovery, the White House said.

The U.S. military has a long-standing presence in South Korea, an arrangement that dates back to the end of the 1950–1953 Korean War. There are currently some 30,000 American troops on the ground, and each spring, U.S. and South Korean forces engage in joint military exercises. North Korea considers the war games a dress rehearsal for invasion, and some South Koreans believe the annual exercises hurt the divided peninsula’s prospects for reconciliation.