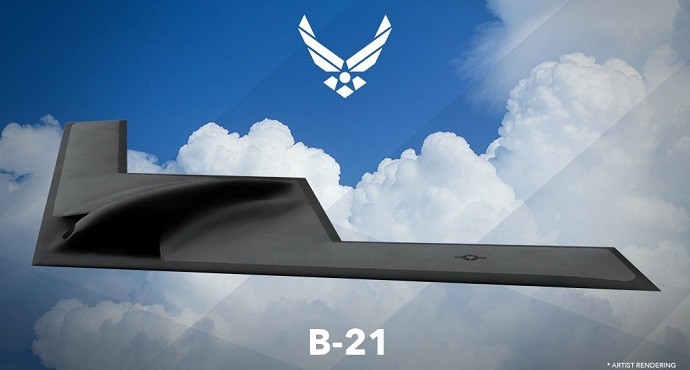 The US Air Force has revealed its bomber for the 21st century, the Northrop Grumman B-21 long-range strike bomber

The US Air Force has unveiled the first official rendering of the new Long Range Strike Bomber and revealed its official designation: the B-21.

The B-21 is formerly known as the Long Range Strike Bomber, or LRS-B in short. It’s the first all-new American heavy bomber in decades, and it’s supposed to fly alongside and could eventually replace the B-52, which has been a mainstay of every major American conflict since the 1950s.

The image displayed at the conference shows an angular flying wing, a tailless fixed-wing aircraft with no definite fuselage that very much resembles the Northrop Grumman B-2 stealth bomber.

“This aircraft represents the future for our Airmen, and (their) voice is important to this process,” James said. “The Airman who submits the selected name will help me announce it at the (Air Force Association) conference this fall.”

“The B-21 has been designed from the beginning based on a set of requirements that allows the use of existing and mature technology,” James said, according to the statement.

While there are no existing prototypes of the aircraft, the artist rendering is based on the initial design concept. The designation B-21 recognizes the LRS-B as the first bomber of the 21st century.

The B-21 has been shrouded in layers of mystery until now. It’s design was kept secret, even as the government awarded a contract to Northrop Grumman to build it.

The new aircraft will purportedly feature stealth capability, carry both conventional and nuclear weapons, and be optionally manned.

Analysts say the program will be worth around $80 billion in total, providing a boon to Northrop and its key suppliers, but the Air Force has said only that it expects to pay $511 million per plane in 2010 dollars.

Senate Armed Services Committee Chairman John McCain on Thursday said he would block the Air Force’s use of a cost-plus type of contract for the long-range bomber since it holds the government responsible for cost overruns.

The Air Force says that only the engineering and development phase of the program, valued at $21.4 billion, is structured as a cost-plus contract with incentive fees.

Production of the first five sets of new bombers, usually the most expensive planes in a new class of aircraft, would be structured with a firm, fixed price, the service said.