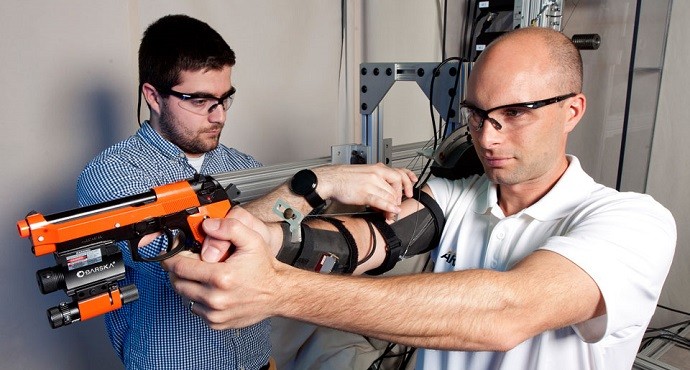 The exoskeleton is designed to eliminate the non-voluntary tremor in a shooter’s arm while aiming and shooting. Much like a puppet, the exoskeleton has a series of motors and cables to dampen the tremor to allow shooters to gain greater accuracy.

Dan Baechle, a mechanical engineer at the US Army Research Laboratory, has developed a new arm-mounted exoskeleton that is designed to be used to train new soldiers to reach shooting proficiency faster.

The exoskeleton for Firearm Aim Stabilization, or MAXFAS, has one key purpose: to remove arm tremors from the shooting equation. If you hold any object at arm’s length you naturally get slight arm movements or tremors. This movement gets worse if a person is fatigued or carrying lots of weight, both of which soldiers experience and yet they are still expected to shoot with a very high rate of accuracy.

Dan Baechle started working on MAXFAS while earning his Master’s degree at the University of Delaware. He got the idea for the device after seeing how exoskeletons help stroke victims relearn how to use limbs.

During his experiments at ARL, Baechle has found that his exoskeleton arm can help novice shooters because even after taking the device off shooters have seen a reduction in the amount of involuntary movement. He said this would be the near-term use for the exoskeleton arm because it would allow the device to remain stationary.

The best marksmen can train themselves to reduce involuntary movements when shooting with different methods such as controlled breathing. It’s harder to execute though when a soldier is fatigued. Baechle has his sights set on designing an arm that soldiers could wear in combat.

However, designing the exoskeleton for wear on the battlefield is further in the future because of the challenges of shrinking the motors and power source to a weight and size that would not slow down soldiers, Baechle said.

The arm exoskeleton is built of carbon fiber and weighs under a pound. However, the motors and cables are heavy and too unwieldy for a soldier to carry in combat, Baechle said.

MAXFAS could have a future in the Army’s pursuit to build a next generation combat suit for future soldiers called the Tactical Assault Light Operator Suit – better known as the Iron Man program.

“That’s a system that’s being developed for a very specific type of operation so they have different goals but that’s not to say it couldn’t work,” Baechle said.