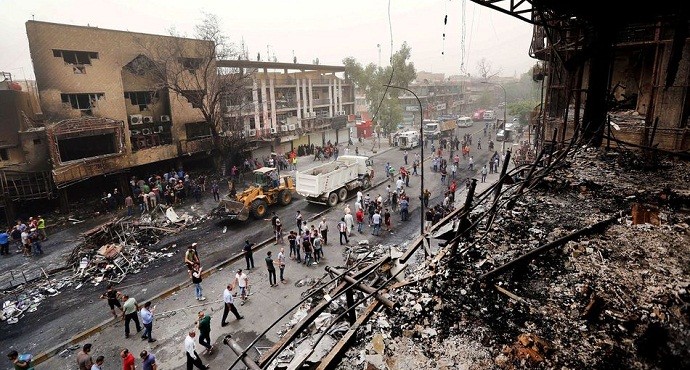 At least 213 dead in Baghdad car bombing, one of deadliest ever. Nearly 200 people are wounded who were out shopping for Eid festival ahead of the holiday

BAGHDAD — The death toll from Saturday’s suicide bombing in central Baghdad has risen to 213 as the bodies of more victims were pulled from the rubble, the officials said.

Iraq’s capital, Baghdad, once again presented the scene of carnage and catastrophe when a powerful explosion rocked the city, killing more than 200 people and wounding another 200, the deputy head of the security committee of the Baghdad Provincial Council, Mohamed al-Rubaye‎ confirmed.

It was the single most deadly attack in Baghdad this year.

The powerful explosion early on Sunday when the streets were filled with young people and families who were out to eat, shop and celebrate one of the last evenings of the Muslim holy month of Ramadan.

The attacks came just days after massacres at a cafe in Dhaka, Bangladesh and at the Ataturk International Airport in Istanbul, Turkey.

The horrifying images and video show the deadly inferno that ripped through a packed Baghdad shopping centre where Iraqis were busy preparing for Eid festival.

Most of the victims were inside a multi-story shopping and amusement mall, where dozens burned to death or suffocated, officials said.

The blast sparked infernos in nearby buildings, and emergency personnel and relatives of the victims were still searching on Monday for the missing. An Iraqi man looks for victims at the bomb site in Baghdad after horrific bombing claimed 131 lives. Photo: Hadi Mizban/AP

“It was like an earthquake,” Karim Sami, a street vendor, told AP. “I wrapped up my goods and was heading home when I saw a fire ball with a thunderous bombing.”

Anger is growing in Baghdad over the government’s failure to protect civilians, after a devastating bombing in a crowded area in the Iraqi capital killed more than 200 people, including many children, and wounded as many as 200.

Prime Minister Haider al-Abadi condemned the bombing and declared three days of mourning across the country. However, during his visit the site of the bombing, Iraqi PM Abadi was met by an angry mob throwing stones at his vehicle convoy, calling him a thief. Though he vowed “punishment” for the perpetrators, bystanders cursed him and his government who they blame for not preventing the carnage on Iraq’s streets that is repeated all too often.

Many Iraqis blame their political leadership for security lapses that have allowed large amounts of explosives to make their way past multiple checkpoints and into areas packed with civilians. Many Iraqis blame their political leadership and corrupt politics in the country for not preventing the carnage on Iraq’s streets.

“All the politicians in Iraq are responisble for these blasts, including Abadi,” a woman in Karada told local media. “We can’t enjoy the Eid; if it isn’t ISIL, it’s al-Qaeda, and if it isn’t the two, it’s the filthy corrupt politics in this country.

“We are being targeted while they are sitting safe and sound in their palaces. They are the ones who are allowing ISIL to come here and murder people.”

College student Sadeq al Zawini, 25, was watching as rescue workers pulled bodies from the rubble. “We’ve had it with the Iraqi government and politicians. They can’t continue blaming Da’esh and other terrorist groups. We need a solution,” he said. “I lost several friends myself, some are still missing,” he said, sobbing

The Islamic State of Iraq and the Levant (ISIL, also known as ISIS) group claimed responsibility for the attack in an online statement, according to the SITE Intelligence Group, a US-based monitoring service.

In a separate explosion on the same day, at least five people were killed when an improvised explosive also went off in the Shaab neighborhood of southeastern Baghdad. Most of the victims were inside a multi-story shopping and amusement mall, where dozens burned to death or suffocated

“The terrorists of Daesh [ISIS] who have suffered defeats at the battlefront are seeking to avenge their losses by targeting vulnerable civilians,” he said. “Despite the pain and agony the Iraqi people will not surrender to the designs of those terrorists, will continue to reject their ways through displaying steadfast national unity and will eventually triumph.”

The White house issued a statement. “These acts of mass murder are yet another example of Da’esh’s contempt for human life,” said State Department John Kirby, using another term for ISIS. “From Baghdad to Istanbul, Brussels, Dhaka, and Paris, Da’esh terrorists murder the innocent to attract attention and recruits. They will not succeed.”

The attack comes after Iraq recaptured Fallujah from ISIS

The attack, which security and medical officials said killed at least 213 people and wounded more than 200, came a week after the Iraqi forces recaptured Fallujah from Islamic State, leaving Mosul as the only Iraqi city under the group’s control.

The military operation has fuelled an exodus of thousands of families, overwhelming camps for the displaced run by the government and aid groups. According to the U.N. refugee agency, more than 85,000 people have fled Fallujah and the surrounding area since the offensive began. The UNHCR and others have also warned of dire conditions in the camps — where temperatures are well over 40 degrees Celsius (104 F) and shelter is limited — and have called for more funds to meet mounting needs.

Fallujah, which is located about 40 miles west of Baghdad, was the first city to fall to ISIS, in January 2014.