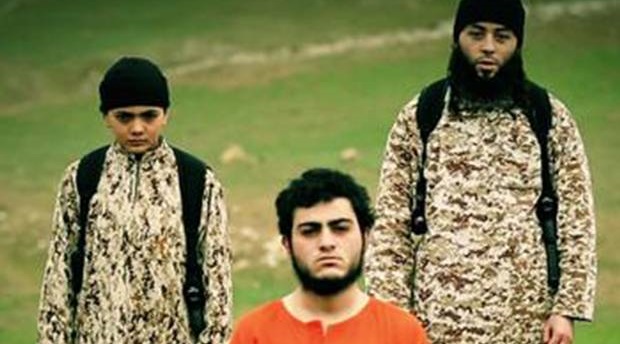 ISIS has released footage purportedly showing a young boy executing an Arab-Israeli man accused of being an “Israeli spy.”

In the video published on Tuesday evening, the victim identifies himself as 19-year-old Mohammed Said Ismail Musallam. He also describes his alleged recruitment by Israeli intelligence. The extremist group claims the man infiltrated their ranks in Syria

He appears kneeling in front of the boy, who is believed to be no older than 12 years old, wearing an orange jumpsuit. The boy executioner stands alongside another man, who proceeds to issue threats against Jews in France, speaking in French. The boy then faces the hostage and shoots him in the head. The child executioner then shoots the already dead man four more times. Back in February, Musallam’s father Said denied the Islamic State’s allegations that his son was an Israeli agent.

“My son is innocent; IS accused him of working for Mossad because he tried to run away,” Said told AFP, adding that Mohammed did go to Syria to join the ranks of ISIS. Said also mentioned that it is very likely that his son was recruited online and left his fire department job for that purpose.

A spokesman for Israel’s Shin Bet security service confirmed to AFP that Mohammed left Israel on October 24 “on his own initiative.”

Meanwhile, the extremist group’s online magazine, Dabiq, accused Mohammed of being involved with Israeli intelligence services, stating that his goal was spying on IS and other Palestinians fighting for the terror group.