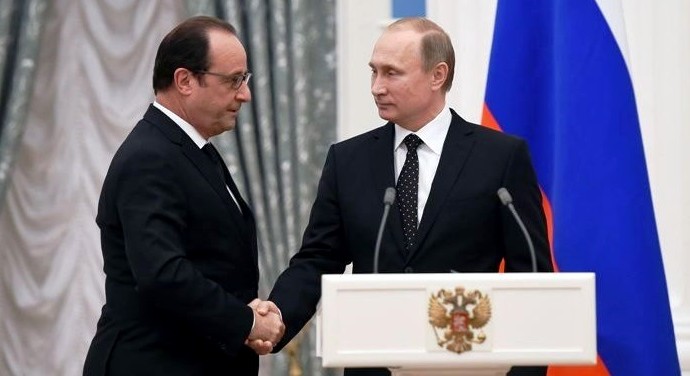 “What we agreed, and this is important, is to strike only terrorists and Daesh (Islamic State) and to not strike forces that are fighting terrorism. We will exchange information about whom to hit and whom not to hit,” Hollande told a joint news conference with Putin.

Putin said that Russia is ready to more broadly coordinate its military action in Syria with the U.S.-led coalition, but he harshly criticized Washington for failing to prevent the downing of a Russian warplane by NATO member Turkey. Hollande said Tuesday’s shoot-down of the Russian jet was a “serious incident, obviously regrettable” that underlined the need for closer coordination between the nations which are fighting ISIS.

“It is crucial in that period to avoid any risk, any incident, and prevent any escalation,” Hollande said at a news conference following the Kremlin talks.

“The only goal we must have is fighting Daesh and neutralize the terrorists, there is no other goal,” he said.

France will also increase its support to rebel groups battling Islamic State on the ground in Syria, Hollande added.

French President is on a diplomatic tour to build a common front against the militant Islamist group that has claimed responsibility for the attacks in Paris on Nov. 13 that killed 130 people.

Putin said Moscow was ready to unite with Paris against a “mutual enemy”, but he reaffirmed Moscow’s long-standing view that Assad and the Syrian government were also allies in the fight against terrorism

Addressing reporters at the Kremlin, Hollande restated France’s view that Syrian President Bashar al-Assad, a key ally of Russia, had no place in the country’s future.

But in a sign of convergence between Paris and Moscow, Hollande said the two leaders had agreed to strike “only terrorists” in Syria, namely the Islamic State (IS) group and similar jihadist organisations.