Home / Europe / News / US / Europe can no longer completely rely on US and UK: German Chancellor 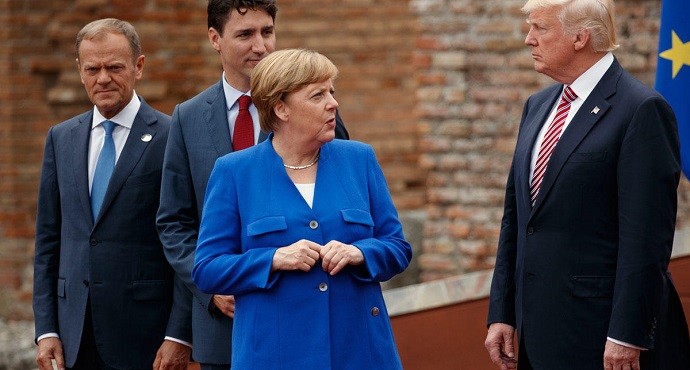 After G7 Summit, Merkel says Europe can no longer completely rely on U.S. and U.K.

German Chancellor Angela Merkel, distanced herself from U.S. President Donald Trump after unsatisfactory G-7 talks, saying that Europe can no longer rely on the U.S. and urging the region to “take our fate into our own hands.”

Offered a grim appraisal of U.S. President Donald Trump’s first meeting with leaders of the G-7 group, she urged Europe to prepare for a future in which it has to be much more self-reliant.

“The times in which we could completely depend on others are on the way out. I’ve experienced that in the last few days,” Mrs Merkel told a crowd at an election rally in Munich, southern Germany.

“The times in which we could completely rely on others are over to a certain extent. That is what I experienced in the last few days,” Merkel said.

“We Europeans truly have to take our fate into our own hands,” she added, receiving a minute-long ovation after her remarks.

The New York Times called it a “potentially seismic shift” whereas the Washington Post termed it a “new chapter in U.S.-European relations.”

Merkel’s comments came a day after a meeting of the leaders of seven wealthy democracies in Sicily failed to end in a deal to uphold the Paris climate accord, while there was also a split on trade and the question of refugees.

While six of the seven renewed their commitment to the 2015 Paris accord on climate change, Trump said he needed more time to decide.

Merkel said the result of the G7 talks, which she described as “six against one”, was “very difficult, if not to say very unsatisfactory.”