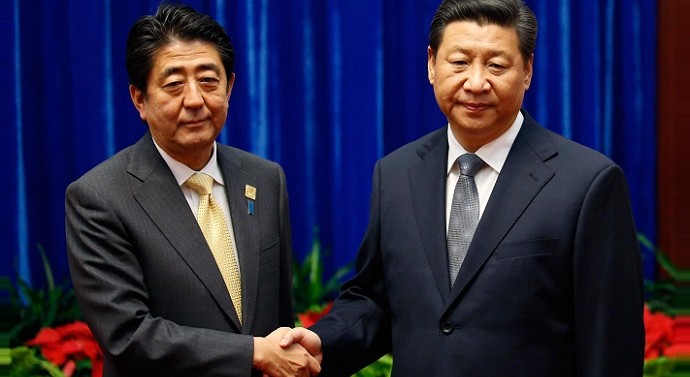 The Chinese and Japanese leaders have held another rare meeting in a sign of easing tensions between the two East Asian powers over the disputed islands and the wartime legacy.

Chinese President Xi Jinping and Japanese Prime Minister Shinzo Abe were attending a gathering of Asian and African nations to celebrate the 60th anniversary of the Bandung Conference, which was attended by nations opposed to colonialism. The gathering was held in Indonesia’s capital, Jakarta.

The meeting which lasted about 30 minutes was viewed as much warmer and better compared to the last talks between the two leaders in November 2014 in China.

China and Japan have had frosty relations, but their ties have hit an unprecedented low over issues such as the disputed islands in the East China Sea and Japan’s approach to its wartime crimes.

China claims the islands, which are currently controlled by Japan. Beijing also accuses the Japanese PM of not being apologetic enough for his country’s World War II aggression.

The claims on the wartime aggression were again stirred after Abe on Wednesday refused to make a clear apology over the issue in his speech to the summit. Abe, however, expressed his “deep remorse” over the rampage at the time.

“And Japan, with feelings of deep remorse over the past war, made a pledge to remain a nation always adhering to those very principles throughout, no matter what the circumstances,” Abe said in his speech.

Abe’s failure in making “heartfelt apology,” as wanted by China and South Korea, came as over 100 Japanese lawmakers visited a controversial shrine in the capital, Tokyo, on Wednesday, where some senior military and political figures convicted of committing war crimes are buried.

The 106 Japanese parliamentarians paid their respects to the dead at the Yasukuni shrine in central Tokyo in an annual tradition as part of the spring festival.

Visits to the shrine by Japanese officials anger China and South Korea, which see the move as a symbol of Japan’s lack of penitence.

Abe himself drew sharp protests from his Asian neighbors on Tuesday after he offered a symbolic gift to the shrine. This is while he decided not to visit it in person.

Last November, the two countries released formal documents outlining their differences on the islands, hardened positions that would not be changed any time soon, diplomats said.

China continues to send patrol boats into waters claimed by Japan near the islands. This month, Japan’s Defense Ministry reported repeated flights by Chinese aircraft near the islands and also near the southern Japanese island of Okinawa.

The Chinese leader most likely raised the possibility of Japan joining the new China-led Asian Infrastructure Investment Bank at a later stage, Mr. Shi said. Japan, along with the United States, is not a founding member of the bank, which has attracted more than 50 countries, including a majority of the Group of 20’s advanced economies.

Mr. Xi also told Mr. Abe that he would like to improve communication with Japan and work with him so that the two countries did not pose a threat to each other, the state-run China National Radio said.