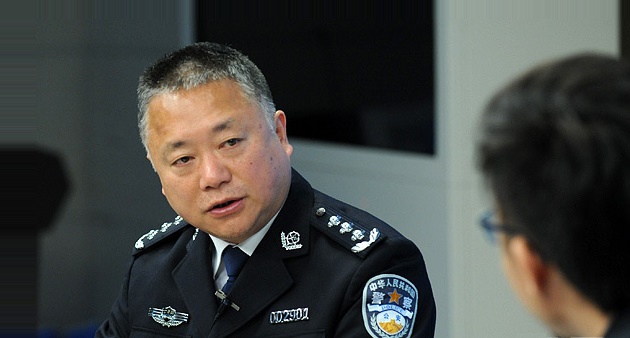 The 56-year-old, previously an assistant minister of public security, will coordinate the nation’s efforts to prevent terrorist attacks.

A spokesman for the Ministry of Public Security declined to give further details on Liu’s appointment. However, Mei Jianming at the People’s Public Security University of China welcomed the move.

“After Liu’s appointment, it’s urgent we set up a national intelligence-sharing platform, which will help the authorities to obtain and analyze terrorist-related intelligence, then effectively direct forces such as the police, armed police and soldiers to stop terrorist plots and target criminal groups,” said Mei, director of the college’s counterterrorism research center.

Liu’s appointment follows a series of terror attacks in recent years across the country that have claimed many lives, including in March last year when an armed gang killed 29 people and injured 143 others in Kunming, capital of Yunnan province.

In May last year, the ministry launched a one-year operation targeting major violent incidents. According to the authorities, several terror suspects from China’s northwestern Xinjiang Uygur autonomous region were prevented from leaving the country to receive terrorist training in the Middle East or join the Islamic State.

After the recent attacks in Paris, which left 129 dead and hundreds injured, China has “strengthened patrols and preventive measures across the country to stop similar cases occurring here”, the ministry said.

Liu, who is from the central province of Hunan and in earlier interviews has called himself a “grassroots police officer”, has been involved in efforts to halt the illegal drug trade since the 1980s.

Draft legislation on China’s first counter-terrorism law has attracted worldwide attention because it redefines the term “terrorism” and further restricts news media to report on details of terror attacks.

Officials say China faces a growing threat from militants and separatists, especially in its northwestern Xinjiang Uyghur Autonomous Region, where hundreds have died in violence in the past few years as a result of terrorist attacks.

According to the new draft, terrorism is defined as any proposition or activity — that, by means of violence, sabotage or threat, generates social panic, undermines public security, infringes on personal and property rights, and menaces government organs and international organizations — with the aim of achieving a certain political and ideological purpose.

Analysts say the new definition is in line with a Shanghai Cooperation Organization (SCO) counterterrorism convention, and the UN’s Declaration on Measures to Eliminate International Terrorism.

A previous version of the draft law, submitted in February, did not cover personal and property rights or political and ideological purpose.

In contrast, the new draft makes it clear that China opposes all extremism that seeks to instigate hatred, incite discrimination and advocate violence by distorting religious doctrines and other means. This is regarded as an effort aimed at eradicating the ideological basis for terrorism.

None, except news media with approval from counterterrorism authorities in charge of information distribution, shall cover the personal details of on-scene workers, hostages or authorities’ response activities.

What’s worth noting is that the revised draft stresses the need to be striking a balance between anti-terrorism and human rights protection, which is considered positive as the government is acknowledging the human rights concerns that have been expressed about this law.

Currently China does not have anti-terrorism legislation, though related provisions feature in various NPC Standing Committee decisions, as well as the Criminal Law, Criminal Procedure Law and Emergency Response Law.

The NPC’s standing committee passed a decision to improve anti-terrorism work in October 2011, but it was never made into law. Analysts believe the lack of a systematic law in this field has hampered China’s fight against terrorism, with measures deemed not forceful enough.

In one of the most deadly cases, twenty-nine people were killed and scores more injured by knife-wielding assailants at a train station in Yunnan’s capital city, Kunming, on March 1, 2014.

In May last year, the Ministry of Public Security launched a one-year operation targeting major violent incidents. According to the authorities, several terror suspects from northwest China’s Xinjiang Uygur Autonomous Region were prevented from leaving the country to receive terrorist training in the Middle East or join the Islamic State.

After the recent attacks in Paris, which left 129 dead and hundreds injured, China has “strengthened patrols and preventive measures across the country to stop similar cases occurring here”, the ministry said.

Terrorist attacks have brought greater urgency for a counterterrorism law. The first draft of the law was submitted for review in October last year and the second draft in February this year.

In addition, the draft anti-terrorism law has attracted concern in Western capitals as it could require technology firms to install “backdoors” in products or to hand over sensitive information such as encryption keys to the government, according to Reuters. But it is not clear if the technology requirements remain in the new draft or how the final law could differ from the drafts.

Chinese Foreign Ministry spokesman Hong Lei has said China will maintain communication to ensure the law also fits international practice. However, he emphasized that China will formulate its anti-terrorism law based on its own counter-terrorism needs to protect national security.

NPC spokeswoman Fu Ying has said many Western governments, including the United States, had made similar requests for encryption keys, and Chinese companies operating in the United States had been subject to intense security checks. She promised that the legitimate interests of technology firms would not be affected.