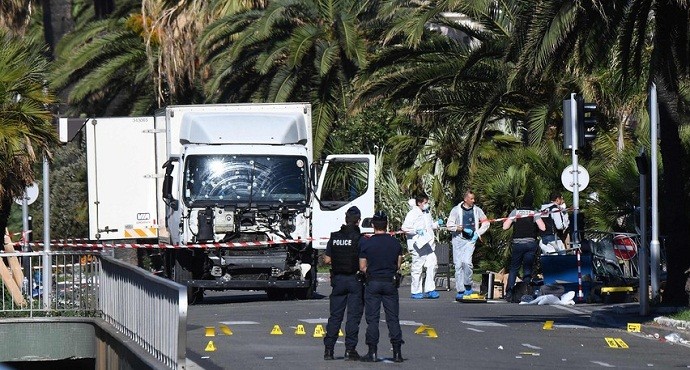 NICE, (France) — At least 84 people have been killed after a lorry slammed into a crowd of people celebrating Bastille Day in the French city of Nice on Thursday night, in what is being investigated as a terror attack.

Many children were among the death toll in the Riviera city following a “cowardly and barbaric” atrocity.

As hundreds remained in hospital, including 18 in intensive care, anti-terrorist judges opened an investigation into ‘mass murder’.

The attacker, identified by a police as a 31-year-old Tunisian-born Frenchman, also opened fire before police shot him dead. He had been known to the police for common crimes but not to the intelligence services, the source said.

After being stopped by armed police, who fired bullets into the lorry’s windscreen, the so far unnamed man exchanged fire with officers using a 7.65pistol, before being shot dead.

“He was known to the police for violence, and using weapons, but had no direct links with terrorism,” said an investigating source. “His identity car was found in the lorry. He had French and Tunisian nationality.” Shocking images, many of which are too distressing to show, revealed the carnage and the trail of destruction the truck driver left behind.

The attack took place during the fireworks, according to French media, at about 11 pm local time.

Soon, Bastille Day celebrations were transformed into scenes of chaos and carnage after the large white truck careered down the packed promenade.

Witnesses described a horrific scene, with bodies strewn along the roadway.

“People went down like ninepins,” Jacques, who runs Le Queenie restaurant on the seafront, told the France Info radio station.

“It’s a scene of horror,” Eric Ciotti, a local member of parliament, told the station, saying the truck “mowed down several hundred people”.

“I saw bodies flying like bowling pins.. heard noises, cries that I will never forget.. it was horror” French journalist told. United Nations issued a statement calling the latest “cowardly and barbaric”.French Prime Minister Manuel Valls tweeted: “The city of Nice has been hit by terrorism on the day of our national holiday. Immense pain, the country is in mourning. The French will face it.”

Meanwhile, French Prime Minister Manuel Valls tweeted: “The city of Nice has been hit by terrorism on the day of our national holiday. Immense pain, the country is in mourning. The French will face it.”

In a pre-dawn address to the nation, French President Francois Hollande said: “France is filled with sadness by this new tragedy”.

Hollande said he had no doubt  the attack was an act of “terrorism”, calling it an assault on liberty by fanatics who despised human rights. Hollande said soldiers would be deployed to support gendarmes and police, particularly at the country’s borders.

Hollande said a state of emergency implemented after the November terror attacks in Paris and due to end on July 26 will be extended by another three months.  He said the country’s borders were being tightened, as he vowed that France would show “real force and military action in Syria and Iraq”. What is Bastille Day?

Bastille Day, which celebrates the storming of the Bastille prison in Paris during the French Revolution of 1789, is the country’s biggest public holiday. The main event, a military parade, is held in Paris attended by dignitaries while French cities and towns celethete teh day hosting their own fireworks displays.