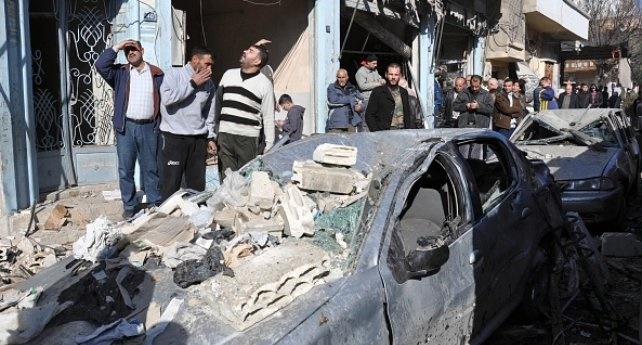 A large car bomb exploded near a hospital in the central Syrian city of Homs today, killing 16 people and wounding dozens

BEIRUT— A car bomb exploded Saturday in a government-held neighborhood in the central Syrian city of Homs, killing at least 16 people and wounding dozens, state media and an opposition monitoring group said.

A vehicle bomb detonated close to a hospital in the mainly Alawite neighbourhood of al-Zahra in the east of Homs city, the Syrian Observatory for Human Rights monitoring group said.

“The explosion was terrifying. Body parts were on the ground … it was one of the biggest explosions to hit Homs,” a 28-year-old woman working in a neighbourhood coffee shop said.

“The blast left a huge crater, and people were running in every direction in fear of more explosions,” she added.

The second large blast, originally suspected to have been a bomb, appeared to have come from an exploding gas canister and wounded people who had come to tend to victims of the first explosion in the densely-populated neighbourhood, state media said.

A second blast was heard in the city, but its cause was unclear, the Observatory said.

Syria’s civil war has killed more than 250,000 people and wounded a million.