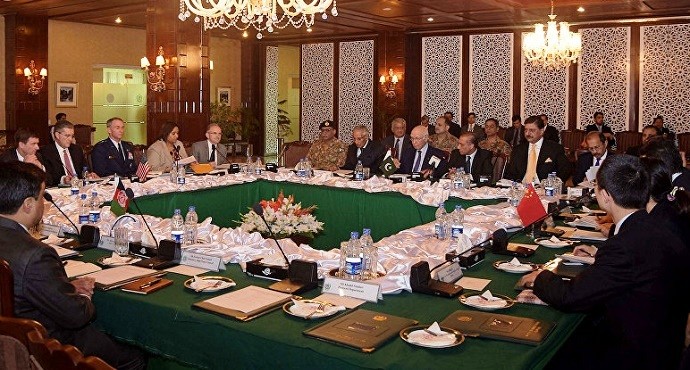 A four-nation meeting in Islamabad discussed the possibility of a return to talks with the Afghan Taliban.

Delegates and envoys from Afghanistan, China, Pakistan and the United States held a meeting in Islamabad on the situation in Afghanistan on Monday.

Building on the outcome of December 9 trilateral and quadrilateral meetings at Heart of Asia Conference in Islamabad, the Group considered mutual efforts to facilitate an Afghan-led and Afghan-owned peace and reconciliation process with a view to achieving lasting peace and stability in Afghanistan and the region.

All four countries underscored the importance of brining an end to the conflict in Afghanistan that continues to inflict senseless violence on the Afghan people and also breeds insecurity throughout the region. The participants emphasized the immediate need for direct talks between representatives of the Government of Afghanistan and representatives from Taliban groups in a peace process that aims to preserve Afghanistan’s unity, sovereignty and territorial integrity.

The Pakistani prime minister’s foreign affairs adviser, Sartaj Aziz, said the primary goal should be to convince the Taliban to come to the table and consider giving up violence. “It is therefore important that preconditions are not attached to the start of the negotiation process. This, we argue, will be counterproductive,” he said.

“The threat of use of military action against irreconcilables cannot precede the offer of talks to all the groups.”

China’s inclusions in the talks on Monday signals its growing involvement in the Afghan peace process. Hong Lei, a spokesperson for China’s Foreign Ministry, said in a regular press conference on Monday that “China supports ‘the Afghan-led, Afghan-own[ed]’ reconciliation process, and stands ready to play a constructive role to that end.”

“On the premise of respecting Afghanistan’s sovereignty and the will of all sides, China will work with all parties to support and help relaunch peace talks inside Afghanistan,” Hong added.

Last year was one of the bloodiest on record in Afghanistan, following the withdrawal of most foreign troops at the end of 2014. The situation in Afghanistan has worsened in recent months, with the Taliban and other extremist organizations taking advantage of instability in the country to carry out attacks against major cities in the country.

Senior members of the movement said last week that Taliban leader Mullah Akhtar Mansour’s faction had shown signs of warming to the idea, and other groups were considering it.

But a splinter group headed by Mullah Mohammad Rasool Akhund, which rejects Mansour’s authority, has dismissed any talks under the mediation of the United States or Pakistan or China. The Taliban has redoubled its operations in Afghanistan after NATO ended its military mission in the country in late 2014, shifting to a non-combat operation instead.

The Quadrilateral Coordination Group will hold another meeting on January 18 in Kabul, to continue “discussions on a roadmap” to an eventual peace process.