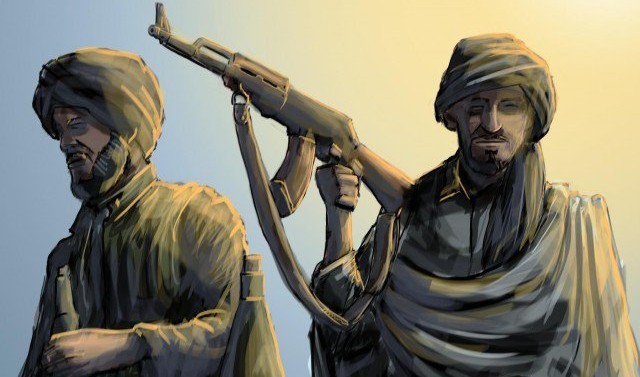 The Afghan Taliban have published a surprise biography of the reclusive Mullah Mohammed Omar, to mark his 19th year as their supreme leader.

The biography acclaim Omar’s “charismatic personality” and contains several anecdotes of battlefield valour describing him as being actively involved in “jihadi activities”, dispelling speculation that he had died.

It lists RPG-7 grenade launcher as Omar’s “preferred weapon of choice” and says he leads a simple life and has a “special” sense of humour.

In a section on his “charismatic personality”, the biography says Mullah Omar

The 5,000-word biography, published on the Taliban’s main website, clarifies disputed facts about his birth and upbringing.

The biography says he was born in 1960 in the village of Chah-i-Himmat, in the Khakrez district of Kandahar province, in the south of the country.

It refers to the supreme leader as Mullah Mohammad Umar “Mujahid” and says he is from the Tomzi clan of the Hotak tribe.
It says his father was Moulavi Ghulam Nabi, a “respected erudite and social figure” who died five years after Mohammed Omar’s birth. The family moved to Uruzgan province. The biography says Mullah Omar abandoned his studies in a madrassa school after the Soviet forces invaded Afghanistan and became a jihadist “to discharge his religious obligation”.

It lists his military feats fighting the Russians between 1983 and 1991, saying he was wounded four times and lost his right eye.

In 1994 Mullah Omar took over leading the Islamic mujahideen to tackle the “factional fighting” among warlords that followed the collapse of the communist regime in 1992.

Then in 1996 he was conferred the title “ameer-ul-momineen” (head of the pious believers), the biography says, becoming supreme leader.

After taking Kabul and establishing the Islamic Emirate of Afghanistan, the biography tells of the “arrogant infidel powers of the world” who “could not tolerate Sharia law” and launched a joint military invasion.

The Taliban’s surprise move to release his richly-detailed biography, even describing his personal and family life, took security analysts by surprise.

‘The Taliban have posted Omar’s biography for several strategic reasons – the most important of which is to counter Daesh influence in their ranks,’ said Ahmad Sayedi, an expert on the Taliban, alluding to the Arabic abbreviation for the Islamic State terror group.
‘This announcement is also meant to show that Omar is alive and well and still in control as the supreme leader of the Taliban.’

In the past 13 years, Omar has stayed completely out of the public eye amid growing power struggles within the Taliban and fears of ISIS’ influence in their ranks as an ideological rival.

The Afghan government has also raised the ominous prospect of ISIS making inroads into the country, though the group that has taken over swathes of territory in Iraq and Syria has never formally acknowledged having a presence in Afghanistan.