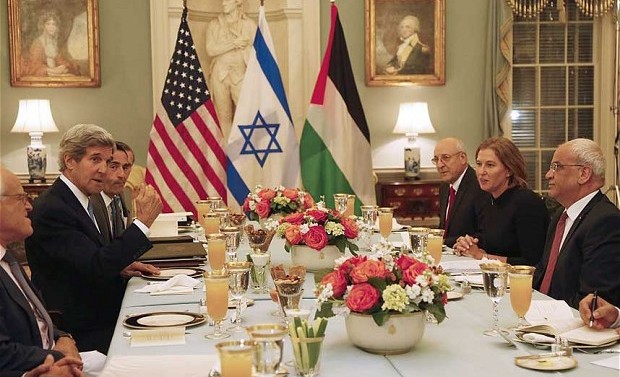 WASHINGTON – US Secretary of State John Kerry is ending 2014 much in the same way he started it, frustrated in efforts to push Israel and Palestinians toward peace.

With a diplomatic showdown looming this past week over Arab plans to force Israel from occupied Palestinian lands within three years, Kerry prepared for a quick trip to Jordan in hopes of finding a calmer alternative.

By Thursday, the crisis appeared to have been averted when Palestinian and Jordanian officials said they wouldn’t push their resolution to an immediate vote in the U.N. Security Council, partly because the US threatened a veto.

The fast-moving political drama was a small, if temporary, victory for America’s chief diplomat in his quest to end generations of fighting and tensions between Israelis and Palestinians. But it also showed how unlikely it is that Kerry can help restart peace talks soon, much less achieve the lasting truce he long has hoped to arrange.

“If people come together, work together, exert an effort to try to find the common ground here, I’m confident that the people of Israel are as interested in peace as are the people in Palestine, in the West Bank, in Jordan, and in the region,” Kerry said recently.

“But this is not the moment to opine on that process,” Kerry said.

Last January, Kerry was immersed in the latest round of peace talks that were set to expire in late April. He started the year on a plane to Jerusalem, where he was greeted by Palestinian protests, threats of new Israeli settlement construction and criticism from US officials over how the Obama administration was handling the delicate negotiations.

Even as he urged both sides to resist tit-for-tat barbs, Kerry was lambasted by Israel’s defense minister as “obsessive” and “messianic” and accused of ignoring demands that Palestinian officials said had to be part of a final deal.

He pushed Israeli Prime Minister Benjamin Netanyahu to uphold a pledge to release Palestinian prisoners, but to no avail. He prodded Palestinian President Mahmoud Abbas to consider recognizing Israel as a Jewish state, but was soundly rejected.

In the end, disputes over territorial borders, security, refugees and the fate of Jerusalem couldn’t be settled. The final breakdown was set into motion when Israel moved ahead with plans to build settlement units in an area of east Jerusalem that Palestinians consider their territory.

“And, poof, that was sort of the moment,” Kerry told a Senate Foreign Relations Committee hearing in early April, just weeks before a deadline for a framework plan toward a final peace deal.

Soon afterward, Abbas agreed to form a unity government with Palestinian political rival Hamas, which Israel and the US consider a terrorist organization. Israel angrily cut off the peace negotiations.

The Obama administration had warned that the aborted peace talks could lead to a new Palestinian uprising. By summer, violence began to spiral with the kidnapping and deaths of three Israeli teenagers, allegedly by Hamas. That was followed by a suspected revenge killing of 16-year-old Palestinian youth by Israeli extremists.

The stage was set for a 50-day war in the Gaza Strip, which Hamas controls. The fighting killed at least 2,100 Palestinians and 72 people from Israel.

At the height of the war in early August, when Kerry was traveling in India, he tried to arrange a cease-fire. He even called a middle-of-the-night news conference in New Delhi to announce that an agreement had been reached. That cease-fire fell apart in less than two hours. Netanyahu gruffly advised Kerry “not to ever second-guess me again” on trying to force a truce.

Israel and Hamas agreed to an open-ended cease-fire largely brokered by Egypt later in August.

But tensions between Israel and Palestinians remained high, and spiked last month.

Violent demonstrations led Israel in November to restrict Muslim access to a holy site in Jerusalem that includes the al-Aqsa mosque, the third most sacred place in Islam, and the ancient Hebrew Temple Mount, the holiest place in Judaism. With the crackdown came a fresh round of deadly Palestinian attacks.

Neighboring Jordan, custodian of the Muslim holy sites in Jerusalem and just one of two Arab nations at peace with Israel, pulled its ambassador from Tel Aviv in protest.

But at the request of Palestinian leaders, Jordan last week sought a Security Council vote that probably further frayed the kingdom’s relationship with Israel. The Arab proposal would have set a 2017 deadline for Israel to leave Palestinian territories. Officials on Thursday said the vote would be delayed while diplomatic discussions continued.

That gives time for the potential of an alternative proposal to set the groundwork for peace talks to resume, as Kerry and U.N. Secretary-General Ban Ki-Moon have suggested for months.

Given the decades of US failure to broker a final peace deal, expectations were high that Kerry would bring a new approach. Now, critics in the Mideast and Washington wonder why he bothered at all.

Dennis Ross, a former US diplomat and Mideast peace negotiator, said the “pretty sour atmosphere” between Israelis and Palestinians probably will prevent a final peace deal soon. But giving up, he said, will only “guarantee that things will get worse.”

“If you say our only choice is to do nothing or solve the whole problem, inevitably you’ll do nothing,” Ross said. “And you’ll create a vacuum, and then the worst possible forces will fill the vacuum. But The notion that we’ll be able to solve everything at once is also not realistic.”