For many scholars as well as for state actors, it is hard to understand the acts of terrorists especially of suicide terrorists. Thus, terrorist’s activities and their actions are often conceived as “irrational” but many political scientists argue otherwise. After the 9/11, suicide attacks have been significantly increased, and terrorists are often labeled as irrational actors and policy-makers and strategists make counter-terrorism strategy accordingly. Therefore it is very important to test whether the terrorists are rational actors or not. The findings would not only highlight the motives of terrorists but can also help to understand the mindset of suicide terrorists, and eventually reduce the suicide attacks.

Director of the Center for Security Studies and Director of the Security Studies Program at Georgetown University, Bruce Hoffman argued that, terrorism is a threat mainly for political effect; it is “a planned, calculated, and indeed systematic act... designed to have far-reaching psychological repercussions beyond the immediate target or victim.”(1)

American political scientist, Robert Pape studied all the known suicide attacks from 1980 through to 2003. He concluded that suicide is a rational act because it is purposive. He argues that, “What nearly all suicide terrorist attacks have in common is a specific secular and strategic goal: to compel modern democracies to withdraw military forces from territory that the terrorists consider to be their homeland.”(2)

In “Explaining Suicide Terrorism: A Review History,” Martha Crenshaw views the acts of terrorism from socio-psychological approach and argues that, “there is an emerging consensus that suicide attacks are instrumental in or strategic from the perspective of a sponsoring organization”.(3) She further argued that these terrorists serve the political interests of certain actors, who are mainly non-states actors and challenging well-armed states, their methods are simple yet tactically efficient.

According to Robert Trager and Dessislava Zagorcheva, “Even seemingly fanatical terrorists, intensely motivated by religious beliefs, are not irrational in a sense that makes them impossible to deter.”(4)

Eli Berman, an economist at UC-San Diego, has done field work among ultra-orthodox religious groups in Israel. He believes that terrorist sympathizers are attracted to religiously fanatically groups primarily because of the social services they provide. Terrorist groups “appeal to recruits in part because they are able to offer very high levels of benefits—not just spiritual ones but real services.”(5)

Although, some of the political claims and demands terrorists make are outrageous and unrealistic, but according to a professor at the National War College, Audrey Kurth Cronin, that is not a reason to ignore the underlying logic that informs their actions.(6) 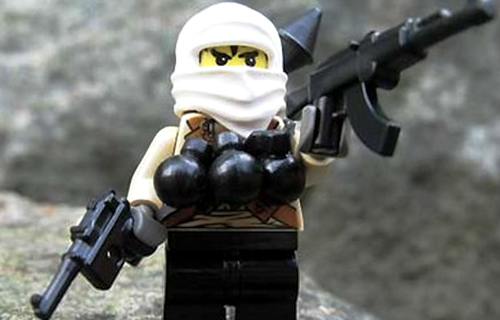 Once we take terrorists to be rational actors, then we need a theory about their rationale. Robert Pape asserts that “offensive military action rarely works” against terrorism, he argued in his “nationalist theory of suicide terrorism” that, the removal of the U.S. military from the Arabian Peninsula and other Muslim countries could be the solution to offensive terrorists’ attacks. Pape believes that “American military policy in the Persian Gulf was most likely the pivotal factor leading to September 11”.(7) Therefore the only effective way to prevent future Al Qaeda attacks would be for the United States to take all its forces out of the Middle East. As far as the U.S. interest and security is concerned, the U.S. does not need to deploy ground forces in Afghanistan. The U.S. should form effective alliances with the regional countries, and in case of any serious crises it can rely on its’ military bases, and naval and air power in the region.

Therefore, to say that suicide terrorism is rational is to say that terrorists, like everyone else, have specific, “reasonable” goals that they wish to achieve through their actions; terroristic violence is, in this regard, an instrument or means to an end. They weigh the costs and benefits of many options and choose the “best” alternative. Indeed, for any terrorists organizations the suicide attacks can be one of the most effective “tools”. Many of the terrorists are made through political process, some organizations or actors turn to terrorism when they have exhausted by the non-violent means to achieve their goals.

Many scholars and politicians also argue that, the U.S. occupation of Afghanistan and Iraq was clearly not welcomed by the local population. In this regard Taliban provide a bleak example of how mistaken policies and strategies during the war on terror have encouraged militants and extremists to gain political legitimacy, which they would have otherwise never achieved.(8)

Although in most of the societies it is quite difficult to understand the act of killing innocent people and especially killing themselves (the acts of suicide terrorism) and put these actions on a rational scale. However, the aim of most the terrorists are not to kill many people but demonstrate the act to many people. As most of the terrorist attacks are well-planned and politically motivated, the terrorist organizations have certain ideological ideas to promote. Therefore, it is wise to assume that their actions are based on rational behavior, and most terrorists are fighting to accomplish their certain political, economic and religious goals.

Since terrorism is a global menace therefore it can only be dealt by developing an effective alliance and sincere partnership, and addressing the basic root causes of terrorism. A formulation of successful partnership with broad capacity of cooperation and collective interests can be achieved by gaining mutual trust and strengthening broader unity.

1) The U.S. and allied forces can engage the militants in talks and give them a chance to join struggle for peace and justice and turn the “war on terror” into a set of strategy i.e. war against crime and corruption, though mass participation and with opportunities of employment for youths.
2) The allies and all partners must cooperate with each other and start making strong legitimate governments and “nation-building” the centerpiece of any counter-terrorism strategy.
3) The Afghans should be provided with an opportunity to elect or select a government model of their own choice without a foreign intervention or influence in their country.
4) A South Africa-style “Reconciliation Process” which may include a general amnesty for militants who are ready to say good bye to terrorism and give up violent activities, this will provide an opportunity to make a fresh start for misguided youths.
5) A fast-track campaign should be launched to uplift the miserable conditions of poor people, particularly youngsters in the tribal areas as the region is still deprived of most basic necessities of life.